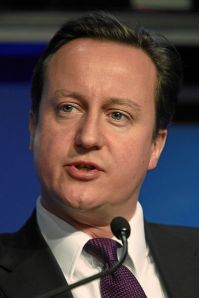 Over at the Heresy Corner blog Nelson Jones has a rather amusing take on David Cameron’s latest intervention into affairs of a religious nature. Parts of it are very funny, and parts are trying a bit too hard to make a political point.

The Prime Minister was asked “What would your response to Jesus be on his instruction to us to sell all our possessions and give the proceeds to the poor?”

To which he replied: well that’s a tough one.

“Um, that’s, I’ve done lots of these Cameron Directs and I’ve never had that question before.

“What I think is so good about Jesus’s teachings is there are lots of things he said that you can still apply very directly to daily life and to bringing up your children. You know, simple things like do to others as you would be done by, love your neighbour as yourself, the ten commandments, the Sermon on the Mount, to me they’re still pretty fresh and good instructions, so I find those a set of instructions I can grapple with but the particular one you mentioned I find that one a little bit more difficult.”

He is also said: “I’m not saying religion is like pick and mix, you just pick the bits you like. I’ve always felt the strength of the Christian faith is the basic core of moral guidance. You can find moral guidance from other sources but it’s not a bad handbook”

David Cameron in the space of a few words sums up the challenge for Christianity in contemporary society. The challenge is presented in how his words carefully encapsulate a couple of key points, and in how he then goes on to miss the far bigger point.

There’s an honesty in the Prime Minister’s response which is to be applauded and which we can learn from. We shouldn’t contort ourselves through theological gymnastics to justify and excuse aspects of the Christian faith we find hard to live out. Some of it’s just tough.

His second point is equally important, the words that Jesus spoke are not antiquated, they are not irrelevant, they haven’t been superseded by advances in a society now too enlightened to need them. The words Jesus spoke were revolutionary in his day and they are in ours. The challenge for the rich to sell their possessions, the hurdle that material prosperity can form between us and God, the prioritisation of those on the margins of society. These are lessons we still need to learn.

It’s difficult to follow what Jesus said, but his teachings are still relevant to our society today, Cameron hit that pair of nails completely on the head. But then it got a bit more complicated.

Because the same teachings he praised make the point in their context that these are laws which we all, like Cameron, cannot live up to. We cannot be good enough.

So while getting that part right Cameron misses the bigger point: the Bible is not a moral handbook, it is not a guide on how to live, it is not something to check our actions against, making sure it’s not a pick and mix selection based on our personal preferences. The lists that Cameron considers as valuable and relevant for our society are just that, they are a good thing, but in our failure to live out that good thing we learn a better thing.

UPDATE Ben Whitnall from the Bible Society has written a great post for the Huffington Post taking on the idea the Bible is a ‘handbook’.

One thought on “Is the strength of the Christian faith its moral guidance?”