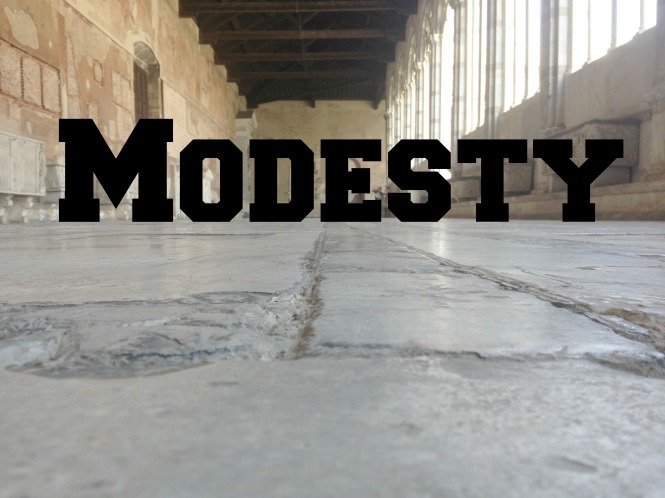 Last night I ate at Nando’s. I went for a half chicken marinated in mango and lime dressing and it tasted good. I could have gone for it naked (or plain as they prefer to put it), but we all know that chicken tastes better when dressed. It made a good thing great. And it’s the same with people and clothes.

I can’t do it. I can’t write an important piece about modesty, attraction, responsibility and liberty premised on an extremely tenuous food metaphor. I’m not going to suggest it’s like putting meat on the BBQ and then telling someone they can’t eat it, or anything about chocolate cake, sweets, or any other edible. I’m not going to say it’s like taking an alcoholic into a bar.

I’m not going to use any of those examples because they are about consumption. We eat food, we drink beer, we do not consume another person. And too often that is the problem when we talk about modesty and attraction: we do so from the mindset of a consumer. We think of other people as an it, as something that we either consumer or do not consume. And in doing so we deprive other people of agency.

When a girl is told, and it is almost always this way round, to wear something longer, or put a t-shirt on over her bikini, it affects both parties. When someone suggests putting the chocolate cake back in the fridge to prevent someone from eating too much, the chocolate cake may miss out on being eaten but it is not affected by the way we treat it as a consumable good, because that is what it is.

People are not consumable goods. We are depriving people of agency when we tell them to act in a certain way for the good of others, and we are also denying the interdependency which means we are all affected by how others act.

A necessary aside: I am a guy writing about modesty, and this issue, as it most commonly presents itself, affects guys and girls differently. Maybe it shouldn’t, but it does. It is girls who get wolf whistles when walking down the street and it is guys who complain about girls in short shorts. And it is also generally guys telling girls to cover up. There is gender asymmetry in this and I recognise that without approving of it. I can take my shirt off in the park without attracting stares, if a girl strips down to her bra she’d get all sorts of disapproving looks.

The modesty rules, as they have come to be known, are basically this: guys struggle with lust, girls wear clothes, guys struggle with lust and attribute this to what clothes girls are or are not wearing, girls told to wear different/more clothes, guys find other types of clothing equalling complicit in inciting their lust, girls told to stop inviting guys lusting after them.

One friend said she wouldn’t hang her purse out of her bag expecting people not to steal it, so likewise she wanted to take responsibility not to invite unwanted attention. And I get that, in many ways I think that’s a very noble attitude. But the problem is that as posited under the modesty rules, the problem for men is the female body, and in their sinful, fallen, state they are unable to cope with it. The problem isn’t hanging your purse outside your bag, it’s having a purse at all.

At its most simplistic and irksome the modesty rules take a problem guys have and make it the girls’ responsibility to solve.

While the portrayal of attraction and the need for modesty deprives women of agency by inferring they are the subject and guys are the ones affected by them, what actually happens in implementing the modesty rules is that guys are then also deprived of agency. It is structured in such a way to suggest that guys are unable to help their lust, so the girls better be a sport and help them out.

Guys have a choice. We will not always be in control of our environment and we cannot blame that lack of control for our lust. If control is what we think will solve a struggle with lust, we have bigger problems to worry about.

Another friend commented: “How are these men going to talk to people about Jesus, especially a conversation with women in immodest clothing, if he stumbles at the sight of her?”

Too often a desire for modesty is about control, it is about wanting things to be ordered in a way that makes one person’s life easier, and not necessarily in consideration of the other person. But I don’t think throwing off the shackles of modesty rules should mean an embrace of independence and autonomy. Because we are not autonomous, and we are not independent, we live in community, both of people we know and those we do not. We are affected by other people.

There’s a particular responsibility that goes with living among a community of people you know, we should be affected by each other, we should shift and change because of our interactions and interdependence with one another. It means that sometimes we might choose to act or dress in different ways, it means we choose to regulate our behaviour. I don’t act the same around everyone and I think that is fine, but I determine how I act based on my relationship with that person, my behaviour is affected by other people, it always will be and it should be. I am not autonomous and I do not want to be.

In the wider context it is far harder. I cannot impose the regulation of behaviour on other people just for my benefit. I cannot make the girl that just walked into the coffee shop where I’m writing this dress differently. And if I could, what would I be doing? I would be surrendering my own ability to control how I think and act, and I would be suggesting that the problem I might have is of sufficient importance to deprive her of her liberty to dress how she chooses. And I do not know this hypothetical person. I cannot control all of my surroundings, and if I could it comes back to that tricky notion, why should I expect my surroundings to accommodate me?

Modesty rules also do two almost contradictory things at once. They tell women their bodies are so attractive to men that they need to cover them up. And they tell them that they should cover because they are more than their physical appearance and they don’t want to be valued only because of their body. What this does is destroy self worth, damage confidence in their appearance, put their body in the dock as problematic, all under the pretence of their looks being ‘too good’. So good they’ve got to be kept in bubble-wrap.

And yet, and yet, the Christian world often places the same value on beauty and physical appearance as the rest of the world. Preachers talk about their hot wives. And modesty is about the beautiful (or so considered in a certain frame of reference) being covered up.

It can cause people, and again to be honest, this is asymmetric and mostly affects girls, to be ashamed of their appearance. It tells women that their beauty is problematic.

So the modesty rules cause problems. What next? Because too often the stuff I’ve read rejecting modesty culture seems to veer towards rejecting any idea of responsibility in favour of autonomy and independence. And I don’t think that’s the answer, I think it’s the guy’s fault if he is struggling with lust. I think it is my fault if I am. But nor is the answer that it never matters what anyone wears.

It matters, but what matters more is that it is the person wearing the clothes that makes the choice what they wear.

“In every country where independence has taken the place of liberty, the first desire of a manly heart is to possess a weapon which at once renders him capable of defence or attack, and, by rendering its owner fearsome, makes him feared.”
Alexandre Dumas (The Count of Monte Cristo)