Things started to get pretty intense at this point Jesus is ducking and diving to keep out of the way of the authorities. He calls his disciples together for dinner the day before passover is to begin, it must be important they think we’ll be celebrating the festival all week.

The atmosphere is different. It is quieter, it is darker.

Jesus begins to talk and he’s got a few screws loose. The disciples really thought this was going to be an intense strategy session, planning the operation for the next week. If ever there was a time to usurp authority then this was it, Jerusalem was thronging with people, they were ready to rise up in rebellion. 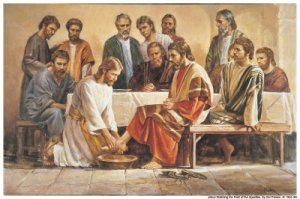 Because if he is king this is what he should do. He should claim what is rightfully his. And the Peter was sure that the others would help him achieve this on his Lord’s behalf. Because kings rule.

So Jesus stood up from the table, he left his place, he took the water – maybe they thought he was going to turn it into wine again – and he began to wash their feet.

Peter was furious, who did he think he was? That was the job of a servant, how could he possibly follow a man who with a towel wrapped around him started scrubbing away at people’s feet. He might as well strip off altogether and let him wash his hands and head as well.

This king did things differently, he was a servant before all else.

Politicians often talk about serving the people, in the military you serve in the armed forces. Serving is not always what it seems. Sometimes serving is actually just a power play. Or to demonstrate that you are one of the people, that you recognise there struggles and their difficulties. In churches in the twenty first century washing people’s feet is a symbol of leadership, it is still a service, and really a particularly pleasant thing to do, but in echoing the actions of Jesus as a Servant King they are reinforcing their position as a leader.

Funny. The upside down kingdom. How to be first we must first be last.

After Jesus had called Judas out on his betrayal the disciples and Jesus walked through the streets. And they talked, or more to the point Jesus talked and the disciples listened on in varying stated of puzzlement. The disciples were worried, as the evening drew in the talk was also getting dark. Jesus said he was going, but where? He said he would be gone a little while, what’s a little while?

Eventually the pictures gave way to clarity. And they started to understand. That he knows all things. That he came from God. And that the father loves us.

This king, this king who washes feet has come to do away with the religious figures that say they are the only way to God. This king says we get to go straight there. This servant king.