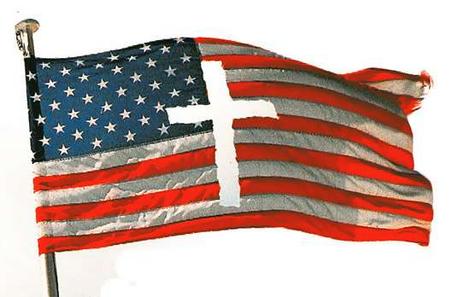 Before the US election last autumn several high profile Christian leaders offered their support for the Republican party and I wrote about it. Billy Graham said everything he possibly could short of endorsing Mitt Romney and Wayne Grudem produced a crib sheet comparing party A to party B – there were no prizes for guessing which was which and who a good Christian would vote for.

Taken against the previous 40 years of American politics such interventions are not unusual or unexpected: a cohesive bloc of voters encompassing both evangelicals and Catholics has disproportionately sided with the Republican Party. The political theology behind this is questioned, and rejected by a large minority of evangelicals in the US but the trend still exists, in contrast such a move is currently unthinkable in a British context. 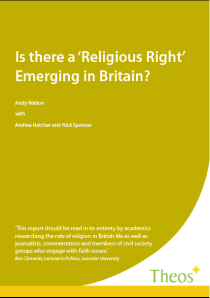 Or is it? That’s the question at the heart of a new Theos report out today. Because something in Britain has been labelled as the religious right by journalists, commentators and even an Anglican bishop. The activities of Christian groups have been investigated and ‘exposed’ to show the apparent dangerous power of right wing religious lobby groups. Most memorably this took the form of a dispatches documentary in 2008 but perhaps most graphically illustrated through an organogram which accompanying Ben Quinn’s article in 2011.

Andy Walton’s research draws a helpful distinction between Christians with socially conservative values and a religious right. The report develops a criteria for measuring this but at simplified level equates to a clear cohesion of different groups centred around specific policy aims and political affiliation and having the size and influence to leverage political action. This is evident in the US, although perhaps not as stark now as in the mid 1990s with Newt Gingrich’s Contract With America which saw considerable mid term gains in 1994. A movement of this nature is not in existence in the UK, although some of the social conservative policy goals are similar to across the Atlantic.

A more pertinent question than whether a religious right exists is whether one is emerging, or could come to exist. Taking appropriate caution the report does not completely rule out the development of such a trend but considers it unlikely. Three areas of difference back up this argument: size, policy focus and political affiliation. Firstly, the UK religious population is far smaller than the US, the number of evangelical and Catholic voters make up a far smaller percentage of the population and therefore there is less political power to leverage.

Secondly, evangelical organisations that engage in lobbying do so on a far broader range of topics than those characterised as ‘right-wing’, these include adoption, alcohol and aid. Issues around sexual ethics and abortion do feature, but not to the exclusion of other policy goals, and have not become the touchstone for evangelical engagement. Research from the Evangelical Alliance showed the diversity of issues Christians contacted their MPs about (page 12 of this research booklet).

Finally, and perhaps related to the previous point, evangelical Christians in the UK support political parties along broadly the same lines as the wider population. While they are more socially conservative than average they are also more likely to support traditionally left-wing economic policies (see page 11 of this booklet). There is also minimal evidence of key Christian leaders encouraging their congregations or supporters to vote for or against certain parties or candidates. One point that is relevant here which is not noted in the report is the role of charitable status: a church could not retain its charitable status and support one party or candidate over another. While this should not be the principle reason for remaining a(party) political, it could be a factor which discourages campaigning organisations from taking this position.

The report shows good reasons why the UK has not seen the development of a religious right along the lines of the US and offers strong evidence for why the development of such is unlikely. But the question that recurred earlier this week at a discussion around the report was whether the definition had been drawn too narrowly and even the US religious right would fail to meet the criteria. The defence offered was that when the comparison is used it is used to suggest a certain thing, and certainly not a good thing, is happening within UK politics, and the report strives to point out this is not the case. But something is happening, several commentators suggested that the way Christian groups engage has changed and become more sophisticated and the current focus on government plans to introduce same-sex marriage perhaps invite the US comparison.

If something is emerging that represents a new turn in Christian political engagement in the UK then it is definitely different to what occurred in the US over the past 40 years. The challenge for commentators, researchers and Christian organisations is to identify what it is and discuss it without recourse to simplistic comparisons. It is also incumbent upon Christian organisations involved in political activity to understand the direction they might be travelling in and the potential consequences both of such a shift and the perceptions of this move.

As the report makes clear, organised political activity, or lobbying to give it its sometimes more grubby title which I’ve defended before, is a legitimate part of our democratic system. It shouldn’t be pejoratively labelled just because you might disagree with the goals. At the same time, perhaps there is a space for Christians to imagine a better way of engaging in politics: one that is more akin to playing on the pitch than shouting from the sidelines.

5 thoughts on “Is there a religious right emerging in Britain?”