If I owned a kilt today is the day I would wear it.

Today is a day for unity and solidarity. After a campaign designed to see the United Kingdom pulled asunder, in the wake of its failure is a never greater need for reconciliation.

Voting is sometimes easy and done with little thought, but this vote was not. Deciding the future of a nation is not a small step. I woke up in the early hours to follow the results as it soon became apparent that the surge in support for Yes, and for an independent Scotland, had shrunk slightly in the closing days.

The votes have been counted and the politicians leading the no campaign are reaching for their prepared lines or hastily redrafting speeches to express just the sufficient amount of pleasure without taking on a patronising tone. Or for those pushing for a yes, acknowledging the people of Scotland have spoken but trying to salvage scraps of victory to take away from the counting table.

In the days and weeks to come the pledges the party leaders cobbled together to give more powers to the Scottish Parliament will be tested. The yes campaign will want to squeeze all they can out of this defeat, well others will feel the promises lacked any mandate and will seek to back pedal on further constitutional change.

But I am sure change will come. It may not look exactly like what Messrs Cameron, Clegg and Miliband promised, but it will come. It will also not just be about Scotland, as more powers go to Holyrood great the pressure becomes to revisit the powers of those MPs representing Scottish constituencies who have a vote over issues that do not affect their areas. This is not simple, you could exclude Scottish MPs from voting on these matters, but that would also need to apply to Welsh and Northern Irish MPs for the more limited areas of devolution there. You could also create an English Parliament meeting at Westminster to decide English only MPs, but once again, what about those votes affecting England, Wales and Northern Ireland? This would also be problematic, because what if the government has a majority for UK wide votes but not for English matters, or vice-versa?

More ambitious ideas, and you could sense the twinkle in the Liberal Democrats’ eyes, include a fuller federalisation of the United Kingdom. Voices have also risen up calling for regional devolution, whether for the North of England, or the Greater Manchester region.

My prediction is that the Government will attempt to give the Scottish Parliament more powers early next year, but this will be delayed and pushed beyond the election due to objections within the Conservative Party. In the Prime Minister’s statement this morning he announced that the changes would be agreed by November and draft legislation published in January, whether it gets further than that is dependent on the good will of his backbenchers. The broader constitutional questions will then become a key part of the electoral battleground at next May’s general election.

I don’t have a kilt to wear today – a checked shirt is as close as I can get. If I were to have a kilt, it would be the Buchanan kilt, as that’s the clan I can trace some roots to. Their motto seems particularly apt today: “Henceforth forward the honour shall grow ever brighter”.

It is my hope that Scotland and the United Kingdom will benefit from staying together. But if, for whatever reason times become hard, I am glad we get to find a way forward together.

Today is a day for celebrating unity, but also for acknowledging that unity does not simply happen, it is a task we have to give ourselves to, commit to, and persevere with. There are many months of hard work ahead, for the politicians as they seek to honour their promises. And for the Scottish people as they continue to live side by side with those whom they have disagreed so passionately and campaign against these past months and years. And it is here that the Church can play a role. It can bring people together, it work for the common good, it can help build a society rooted in values that are not restricted to vote winning manifestos or coalition compromises.

Watching Braveheart won’t be the same, it won’t have the same sense of irrational patriotism – cheering the Scots to rebuff the English won’t feel quite the same. It’s illogical, it is borderline nonsense, but seeing the resistance against the invading armies and the defence of their nationhood seems more stirring knowing that three centuries later it was a Scottish king who took on the united crown of both countries.

When the Union came it was not an invasion, it was not the conquest of a marauding army, but the coming together of two countries.

I have a little Scottish blood in me, I occasionally consider getting a Buchanan tartan to mark that part of my heritage. I have never lived there, visited only a few times, but it is a connection I do not want to lose.

And this week I’m scared about what might happen. And I am saddened too. The idea of a United Kingdom without Scotland seems wrong, it’s like a wedding where the groom doesn’t show. This is no more than an emotional defence of why I want Scotland to stay as part of the United Kingdom. I have heard the arguments – I have seen them shift like the sand beneath tidal turns. I have watched the politicians make the case for independence, and the counter arguments against them. I have listened and tried to comprehend the financial, constitutional and political dimensions of the debate and in each there are reasons why Scotland might want independence, but they fall short against the logic, the romance and the attachment of the Union.

Scotland might be better off if they kept all the revenues from their oil, but they would have to deal with a national debt on their own. They may want to retain the pound, but no one is quite sure how that would work without leaving one union only to re-enter another straight away.

The devolution of powers to Scotland caused all sorts of constitutional niggles – not least the West Lothian Question whereby Scottish MPs have a vote in Westminster on matters that are devolved to the Scottish Parliament and therefore have not impact on their constituencies. But what happens if they vote yes, do MPs stand in 2015 and hold their seats for a year, what if those seats are what ensures a governing majority?

There are certainly political issues at stake, the Conservatives have not fared well north of the border in recent years, their standing in Westminster would be much stronger without Scotland, the dynamics of politics in a Scotland-less-union would be very different. And yet they put aside short term political opportunism to stand for a Union that is more important than who governs it at any particular point.

And this is because this decision goes beyond the logistics and the politics, and the practicalities of how it would work. Maybe Scotland might suffer financially, maybe the rest of the UK might be changed politically, but while those are the battlefields the independence debate has be fought on, they are not the field upon which it will be decided. 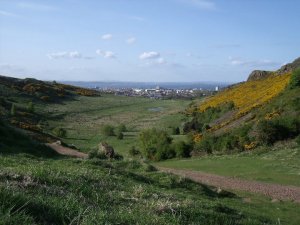 Despite all this I’ve not really engaged with the campaigns, and perhaps that is because I don’t have a vote. Or maybe it is because I have no doubt how I would vote. This is not a decision that rests on the tactics or strategies or the policy promises. It is not about the preening of the politicians or the caricatures of each other’s character. It is about the gut. I care more about the result of Thursday’s vote than I have about any election I’ve observed.

I have leafleted for local council candidates, I have canvassed for prospective parliamentary candidates and I have the wonderful record of never campaigning for the winning candidate. The disappointment of standing at the count and seeing the candidate for a council seat you have work with for weeks lose by a handful of votes fades into insignificance against the prospect of Scotland ceding from the Union.

Needing a passport to get into Scotland isn’t a big deal, if you fly you need it anyway. Even changing currency is a frustration that would be swiftly accommodated. The pain of this divorce would not be in the short term logistics, or the financial turmoil it may lead to. The pain is in the decades and centuries to come when the Union that stood through centuries, that brought peace and stability to these isles, that worked together, accommodated differences and thrived on unity, is only a relic in the history books.

And that is the thought that saddens me, that what made us strong, what helped us through strife, what stood against foes internal and abroad, has slipped away. That’s why I am hoping beyond all hope that Scotland votes no.