Today has been a surreal day. I thought it would be a fairly ordinary Friday, perhaps slightly gentle as everyone is easing into the new year. But it was anything but. For my colleagues, or agents as they will henceforth be referred to, and I we ended up on quite an adventure.

At 11.18 I received the first communication from mystery texter: 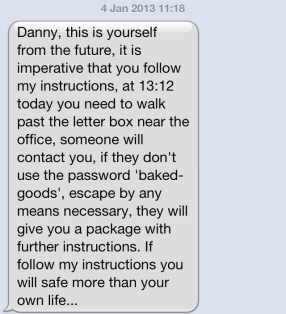 I was curious, as I’m sure you would have been. I hesitated for a moment, sizing up the likelihood that those in my company were in fact the originators of this curious edict, but then told them, and co-opted them into my fun as fellow agents.

We needed some clarification as there are several post boxes in the close vicinity of the office: 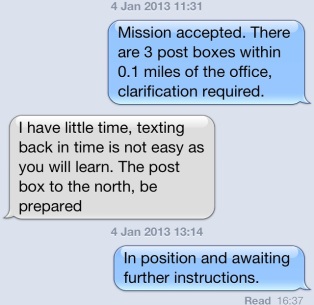 At a little after 13:00 my agents and I left the office and proceeded to the proposed rendezvous. They were wearing high coats and carried magazines to read so as not to arouse undue attention. We loitered as inconspicuously as possible beside the post box for a while, alerted our interlocutor of our presence and glanced suspiciously at everyone who walked by. But nothing. We checked the other post boxes in the vicinity, and then returned wondering if it had been a ruse to get me away from my desk. There was nothing awaiting my return.

I took my fellow agent’s advice and shared the exchange on twitter and facebook, wondering if any light would be shed, or if the perpetrator would own up. Various amused comments, and some concerning suggestions that this might by a identity theft type thing. But then towards the end of the afternoon this further missive entered my inbox – the password has been obscured for obvious reasons! 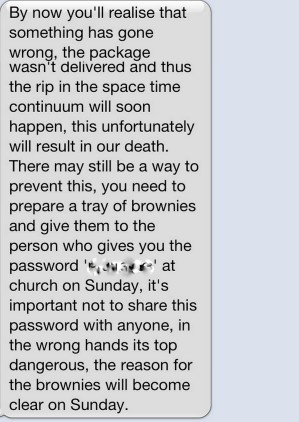 Further updates will be provided as evidence emerges. Anyone willing to come forward with clues as to the identity of the mystery texter, or what their purpose is? I will treat all information in the strictest confidence, although I am afraid I cannot guarantee your safety.

Future self has been in touch. Apparently the disruption to this afternoon’s transaction was due to the failure of my agents to sufficiently disguise themselves. I believe this chronicling of the activities is being monitored from the future. 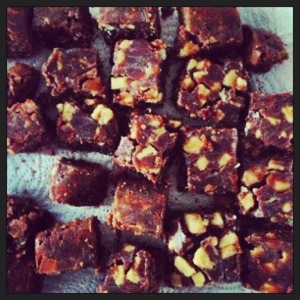 I slaved away over the stove for hours yesterday to prepare my baked goods. It feels a bit like meeting a ransom demand, except nothing had been taken hostage. Well, maybe my future self. I’ll be off to church shortly, watching over my shoulder, doubling back, with a couple of changes of identity in my bag should the need arise.

** The mystery is solved, read how it all unfolded.