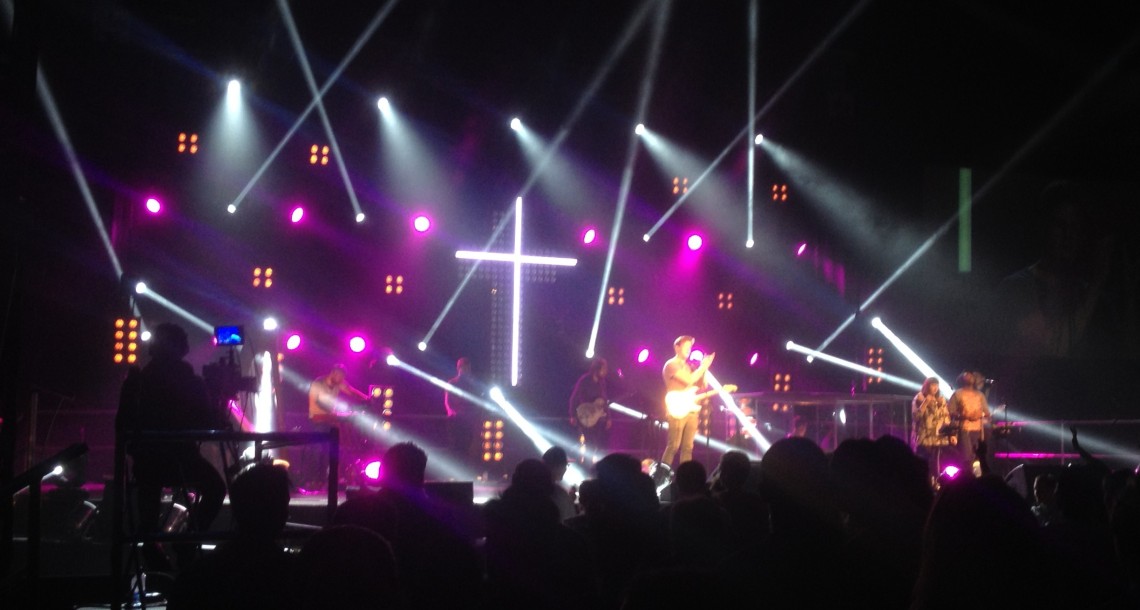 In a field in Italy 1000 rockers struck a chord. A man had a vision, he wanted the Foo Fighters to come and play in his town. So he raised some money, appealed for fellow fans and got them together. Singers, guitarists, bassists, and drummers gathered to sing Learn to Fly together.#

There’s one line, in the bridge if I’ve got my musical lingo correct, that goes: “Fly along with me, I can’t quite make it alone”. Sung by a thousand people who have come together for the very reason of not wanting to sing it alone, it has a certain unrestrained resonance.

At the end the guy behind it all stood in the middle of the throng of musicians to say:

“I guess that this video is going to be seen by a huge, a huge amount of people all over the world, but to be true it has been conceived to be addressed to just five people: Chris, Pat, Nate, Taylor and Dave Grohl, the Foo Fighters. You know, Italy is a country when dreams cannot easily come true, but it’s a land of passion and of creativity, so what we did, and here is just a huge miracle, I’ve been working on this project for more than one year, waking up every morning thinking about how to make it real and this is all that we’ve got. 1000 people, 1000 rockers, that came from all over the nation at their own expense and they did it for one song, your song. So our call is to ask you, the Foo Fighters, to come and play for us, to come and play and give a concert to all of us in Cesena, what I’m asking right now is to make some noise for the Foo Fighters, come on!”

There are old rockers, young kids, there are men and women, those whose hair makes them stand out as it stands on end, others that are a little larger than life. There’s a crazy man who looks a bit like Steve Coogan conducting the whole thing.

There are 1000 people with one thing in mind, one thing which has brought together an eclectic bunch to sing with passion. They may have only been singing to five men in America, but after a few days over 18 million have viewed the official video. The world has watched a bunch of people singing like crazy to get the attention of their favourite band.

And this got me thinking about the big Christian summer festivals. There’s an element of rock concert about them sometimes, but I think this kind of event is a more like what we should be aiming for. Three reasons why:

1. It’s not about the band on the stage

Okay, so the point of their singing is that they want a band on stage, but the marvel of the video is that 1000 people like you and me got together to sing and play together: the audience became the band. There are probably a lot of videos of the Foo Fighters singing Learn to Fly but I doubt any of them has as many views as this one. What’s special is that this is about each and every one of the 1000. I doubt whether many, if any, of the bands playing at big festivals want to make it about themselves, but sometimes it can feel like the focal point of our worship are the men and women on stage. Our singing can be more like fans at a rock concert.

2. They’re singing with a purpose

But singing is not about just reciting words to music, especially not when we are worshipping God. Our worship is a speech act, our songs do something more than repeat truths or create a positive atmosphere. When we call on God to act, he does. When we cry out for God’s kingdom to come a little more of it does. Without wanting to get too eschatological, I believe that God’s kingdom has come, is coming, and will come. When we follow in Jesus’ words, praying or singing ‘Your kingdom come, your will be done, on earth as it is in heaven’, we are calling out for a little more of God’s rule and reign to be evident in the world around us. 1000 rockers wanted the Foo Fighters to come to their town in Italy, when we worship we call out for God to come to our world in our day.

3. They’re bringing our own gifts and talents and using them for that cause

The music from 1000 singers, guitarists, bassists and drummers sounded pretty good to me. I don’t possess many musical abilities – perhaps the sole one being a willingness to sing quite loudly (which, on reflection, is perhaps not a gift to those stood next to me in church). The 1000 men, women and children in a field in Italy brought their talents, they brought their instruments, they paid their fare and plugged what they had into what I can only imagine is a monumental PA system.

When we join together with thousands of others singing in worship to God are we reliant on the talents and abilities of the people on stage, or are we offering what we have?

Last week @God_loves_women wrote a blog on supermarket Christianity, and I think if we’re not careful big conferences and festivals can play into this tendency, that we go for an annual top up and we become dependent on what other people provide. At the other end of the spectrum is the danger of detaching ourselves from other believers, and becoming too focused on nurturing our own faith that we become isolated and the very faith we hoped to build ends up atrophying. Other people are essential to the development, sustenance and overflow of our faith.

I’m not going to any conferences this summer – it’s the first time in quite a few years. From people who have been at New Wine and Focus I’ve heard good things, to those who are going to others, I hope you learn, worship and grow. I have found that as I’ve gone to more events it’s become more about the people I’m with and the time in between the meetings than what’s said and done in the big tent – as valuable as that may be.

Having organised a very small conference a few weeks ago, the same was true. We organised content for the people taking part, but hearing the feedback from those who came reminded me that the programme may be what brings people together but it’s frequently not the most important thing.

I probably remember a handful of talks each year and over time maybe half a dozen that are really important to my ongoing walk of faith. There is a place for consuming. There are times when we need to receive. But we receive in order to go out, we take in in order to give out.

The irony of the Foo Fighers’ fans endeavour is that it wasn’t by accident that 1000 fans came together. This isn’t Field Of Dreams. It took someone’s vision and passion and incredibly hard work to make it happen. The things that bring us together and encourage us to act together are usually especially challenging, and there’s a significant lesson of leadership there. But that’s probably a topic for another day.

There’s been a lot written about feminism in the Christian world this week, and recently the Christian feminist network was launched. The question I’ve been turning over in my head is whether I am one. Am I a feminist?

It’s not as easy as it seems to answer. Is it as simple as believing men and women are equal? Is it more systemic: ensuring equal rights, whether that is social, political or economic? Is it challenging structural imbalances that restrict women through spoken and unspoken patriarchal cultural norms? Is it not removing any hair from your body?

Feminism has a bad reputation in conservative Christian circles. It is seen as undermining the family, destabilising society and rejecting God ordained gender roles. Some of the rhetoric that emanates from the church criticising feminism is overblown and unhelpful. But that doesn’t mean all of the questions should be ushered under the carpet. They should be engaged with sensibly and fairly once we have a grasp on what both Christianity and feminism demand of us.

Only when we have clarity over both identities can we decide whether they are compatible, or fundamentally at odds.

I want to open up a conversation and see where we end up. I’ve already got a couple of thought experiments in my mind that I want to work through. The conversation got moving on twitter this afternoon, but hopefully a bit more space will be created by blogging about it. Does being a feminist require that you are pro-choice, or at least think that abortion should be available even if you consider it wrong?

And the one that got me thinking about this, can you be a feminist and hold a complementarian view of women in leadership? Instinctively I say no, but then I step back and ponder the reasoning behind it. What is the starting point for that decision, what are the non-negotiable river banks?

I am committed to the authority of the Bible, and that might make this a hard conversation for some. It means that once I have worked out what the Bible says about something, it is that which guides the other values and priorities in my life. So if I was to hold a view which was the best conclusion I could reach from scriptural evidence that men and women should take different roles, whether in family life, the church or society, that would then guide how I worked out if feminism was compatible with my beliefs.

I am committed to hearing the voices of those who need feminism the most. I am a middle class white man, and I have a lot of learning to do.

I am committed to rooting my conclusions in reality. I could come up with the most sophisticated and elaborate philosophical construct of belief and equality and it be meaningless if it is not grounded in real life. One example of this struck me this afternoon, on twitter:

I understand where this comes from, how easy is it to say that you agree with something but tag a ‘but’ after, which completely undermines your agreement. The most infamous ‘but’ is equal but different. But what if that’s correct? What if men and women are equal but different? I think they are, at its most obvious, men can’t have children.

@danny_webster well rather than pretending we’re equal in things like physical strength etc.

So the question isn’t removing the buts, but examining whether and how difference is used to undermine equality.

As I said, I don’t think this is simple.